Welcome to my Weblog!
Enjoy reading!This site is dedicated to publishing my unlimited ideas as and when I am able to pen my thoughts and opinions. You're welcome to browse through the archives and comment on the entries.
"And whosoever fears Allah and keeps his duty to Him. He will make a way for him to get out from every difficulty. And He will provide from sources he never could imagine."
- Surah 65 At-Talaq 2,3

Apple officially unveiled the long-rumored iPhone 5C, a stepdown, less-expensive model to the flagship iPhone 5S, which was also announced. The iPhone 5C will be available in five colors -- white, green, blue, pink, and yellow -- with the 16GB model priced at $99 and the 32GB version costing $199.

As expected, the phone has a polycarbonate (plastic) back. Jony Ive, Apple's senior vice president of design, described the iPhone 5C as "beautifully, unapologetically plastic. Multiple parts have been reduced to a single polycarbonate component whose service is continuous and seamless."
How does it feel in the hand? Remarkably solid and dense, more like a candy-lacquered metal phone than a "plastic phone." The 5C has a steel frame under the polycarbonate, and the smooth finish feels very hand-friendly. It also feels heavier than the iPhone 5. Hopefully it'll stay scratch-resistant, because that extra-shiny look is a large part of its charm. It almost feels like an iPhone that's been given a custom hard-shell paint finish, or had a skin-thin case permanently bonded to it. 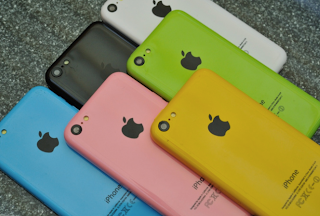 The curved edges are a bit of a return to the older plastic iPhones, but the phone's squarer design still comes through: it has a flat back. It's a shinier, smoother, thicker device than last year's fifth-gen iPod Touch.
The colors are clean, somewhat pastel and vibrant, and Apple's separately-sold $29 microfiber cases studded with large holes come in different color schemes, allowing for mix-and-match patterns. The case's design feels like a similar material to Apple's iPad Smart Covers, and snaps over the back snugly. The design-your-own color process has a similar feel to the Moto X's, and it'll be interesting to see what other cases toy with colors and exposed cut-out designs.
The iPhone 5, which also runs on an A6 processor, will be discontinued, but the iPhone 4S will stick around in an 8GB version that will be free with a two-year contract.
Apple also introduced a new line of $29.99 cases for the 5C, with six color options available. The cases have a "soft, matte" finish to contrast the glossy finish of the 5C's back. 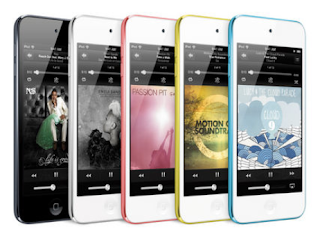 Apple said the 5C has "impressive battery life" and from a first glance at the numbers, it appears to offer better battery life than the iPhone 5, particularly for Internet browsing on LTE (10 hours vs. 8 hours on the iPhone 5). Standby time is rated at 250 hours compared to the iPhone 5's 225 hours.
In all, this is pretty much what we were expecting the iPhone 5C to be: a cheaper-to-produce version of the iPhone 5 that's been jazzed up with an all-new colorful and shiny look. Those colored backs should appeal to younger consumers, though it'll be interesting to see whether iPhone 5C owners choose to protect their phones with cases -- made by Apple or other accessory makers -- or leave them exposed. Less expensive plus a little better battery life and a fresh coat of paint may not sound like magic, but a cheaper, gently tweaked, more colorful iPhone 5 could be the sort of everyday phone a lot of people choose simply for the price. It's just a shame there isn't a less-expensive contract-free version.
Posted by bonoriau at Sunday, September 15, 2013 29 comments:

by Bonoriau
Get this widget

You can connect with me via social media sites at